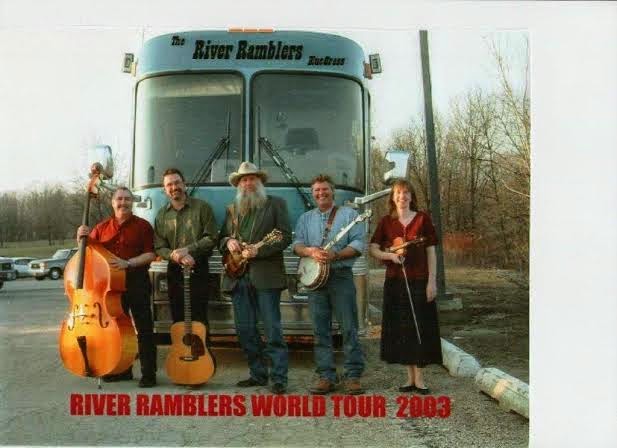 'The River Ramblers are a five piece Bluegrass band that hales from areas surrounding Springfield IL. The group assembled in 1987 with the commitment to maintaining the traditional bluegrass sound. If you’re familiar with the music of Bluegrass icons such as Monroe, Stanley, Flatt & Scruggs, you will recognize nearly every tune this band performs. To date, the group has issued three recordings which include mostly traditional songs combined with some original tunes.

Don Randle is the most recent member to join the Ramblers. He is a computer wizard by day and plays upright bass on the side. Don is a quick study to the music. Don also is an accomplished banjo player and occasionally the Ramblers will sneak in a banjo tune featuring Don.

Jennifer Ramm came to the area from Michigan and quickly found a way to put her fiddling talents to use. She has been with the group since 1993 and provides striking lead and harmony vocals as well. Jennifer added to the band’s sound, the “final touch” necessary to bluegrass music. She is known throughout the area for hosting the local PBS Bluegrass radio show on Sunday evenings.

Mike Smith joined the group in the early years as a bass player and converted to banjo when the original banjo player moved on. Mike was raised in Arkansas where he first acquired an affinity for Bluegrass. He now resides in central Illinois where he continues to enhance his “Croweish” banjo licks. Mike has also developed his own design of “Kat eyz” banjo bridges in recent years and has enjoyed much success producing and marketing them around the world.

The position of guitar is filled by Marc Bourne, a central Illinois native. He is one of the remaining original members of the band and is enjoying continued opportunities to learn the music and instrumentation. Marc also contributes lead and back-up vocals along with providing the “straight man” target of Duane’s big country humor.

Duane Patterson is the founder of the group. He came to the area from Kentucky which is, as you know, “The Bluegrass State”, and could not leave his roots behind. He soon had the group in place and has since always played the role of band promoter. Duane provides most of the lead vocals and plays a “Monroe - like” bold style of Mandolin. There is seldom a dull moment when he is on the stage (or off-stage for that matter).

Duane and the River Ramblers are typically known for their entertaining style on stage as the lively music is combined with an acute degree of personal character. They are sure to keep your attention even if you’re not familiar with this style of music. The group attributes their longevity to
enjoying the music and the camaraderie of their fellow musicians.