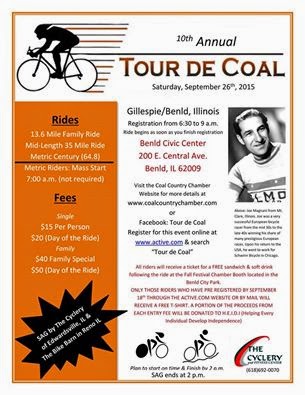 The Tour de Coal is for riders of all ages and abilities who have an interest in cycling in the Macoupin County, Ill., area and will allow cyclists to ride in memory of Joe Magnani, who grew up in Mt. Clare right here in Coal Country. Magnani became one of the premier cyclists on the European scene in the 1930 and ‘40s.

The ride will be held in conjunction with the 16th Annual Fall Festival held at the Benld City Park, where the bike ride ends.

In the 1930s and ‘40s, Magnani’s heroics were largely ignored in the U.S. because there were few followers of the sport here.  Magnani raced professionally for several French and Italian teams from 1935 to 1948.

In early 1943, Magnani was captured by the German Gestapo and sent to a concentrations camp
in northern France where he nearly starved to death.  Magnani was released after the liberation of Paris in 1944 and returned to cycling.  In 1948 he came back to Chicago, was in a crash which forced him into retirement, and began a longtime affiliation with Schwinn Bicycle Co.

Marcacci reports that Magnani assembled the coveted Paramount track and road racing bicycles and did part time coaching.  Even though Magnani was a fixture of Europe’s road races, he never had the opportunity to be in the Tour de France because at that time the teams were organized into national teams and were not sponsored as they are today.  At one time, Magnani was close to competing on an international composite team, but another rider bought his place onto the team.

Magnani was born in LaSalle, IL, but moved to Mount Clare as a child.  His father worked in the  coal mines, but as work dried up and the Depression loomed, Magnani, then a teenager, and a sister were sent to live with relatives near the French-Italian border, not an uncommon practice with bigger families, said Marcacci.

Magnani visited the Coal Country area into the 1970’s.  He died in 1975 at age 63 of Parkinson’s disease.  Magnani still has relatives in Mt. Clare and Staunton. Marcacci and the other members of the Tour de Coal Committee believe that this 10th year of the Tour de Coal is a good time to revive the memories of the Joseph Magnani, who won races all over Europe decades before other known breakout American cyclists, such as Davis Phinney and Greg LeMond.

In the Tour de Coal Bike Ride, cyclists choose from a 13.6-mile family ride, a mid-length 35-mile ride or a metric century (64.8 miles).  The terrain is flat to rolling with some hills.

The Tour de Coal did their first mass start in 2014. There will be a mass start beginning at 7:00
AM for those riding the metric century. If you want to find someone with similar riding skills, this is a good way to find them.  It will start at the registration area on Central Avenue (Rt. 138). All other riders will start their ride heading north on Second Street as in the past. The mass start is NOT mandatory for Metric century riders. If you plan to ride the metric century and do not want to start at 7:00 AM that is alright too. Again, it is not mandatory. All riders other than the mass start riders can begin their ride any time prior to the closing of registration.

Out-of-town visitors to the Tour de Coal can camp Friday night (Sept. 25) at Benld City Park,  which is just 1 block north of the Benld Civic Center. For information about camping, contact Mickey
Robinson at (217) 710-5218 or mrer@madisontelco.com.

BANANAS, BOTTLED WATER, AND OATMEAL COOKIES WILL BE AVAILABLE AT THE REGISTRATION DESK THE DAY OF THE RIDE. PREREGISTRATION BY SEPTEMBER 18
GUARANTEES A T-SHIRT.  Late registration will be honored with T-shirts while supplies last.

At registration, riders are also given a redeemable ticket for a choice of sandwich and soft drink at the Coal Country Chamber of Commerce food booth at the Fall Festival in the Benld City Park.

This year a portion of each person’s registration fee will go to H.E.I.D.I., Helping Every Individual Develop Independence. This fund has been established in memory of my daughter Heidi Brand.. She passed away May 26th, 2011. She was a special needs child and was an advocate for the rights of the disabled..This fund will benefit the special needs children of the Gillespie Community School District...

Other proceeds from Tour de Coal will be used by the Coal Country Chamber of Commerce to improve the communities of Benld, Dorchester, Eagarville, East Gillespie, Gillespie, Mount Clare, Sawyerville and Wilsonville. The Chamber sponsors events such as a free Summer Concert Series, the Fall Festival, and Breakfast with Santa.

The Benld/Gillespie area has a rich heritage because of its ties to the coal industry.  The Region has sizable numbers of people of German, Irish, Italian, Slavic, Scotch and Russian descent drawn to the region by mining.  The region is dotted with more than 27 old coal mines; and the Tour de Coal
routes pass several of them.  Some of these mines have been highlighted on the Tour de Coal Face book page which can be found at  on the internet.

Benld is also home to The Holy Dormition of the Theotokos Russian Orthodox Church, originally built in 1895, the only church in Illinois under the jurisdiction of the Patriarchate of Moscow and All Both Benld and Gillespie are on the original alignment (1926-1930) of Route 66 through Illinois, which is now part of the Blue Carpet Corridor of Route 66.

The 64-mile route uses alignments of Route 66 in the Staunton-Mount Olive area and passes by the grave site of Mary "Mother Jones" Harris, a prominent labor activist in the late 1800's and early 1900's.

The 64-mile route also goes through the community of Bunker Hill, home to one of the ride's rest stops.  There are 5 other rest stops throughout the ride.