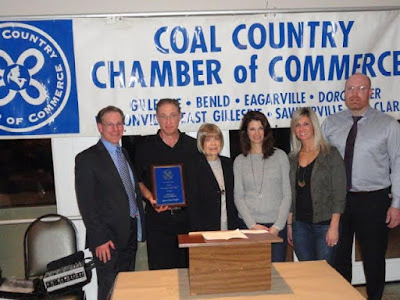 Business of Year--John Baggio was surprised when he was called from the kitchen at JoDanni's Amore to accept the Business of the Year award.  Mike Brill, Chamber treasurer, made the presentation.  Baggio and his wife Dana have lived in the community for many years and have been a member of the Chamber since it  inception in 1999.

The name, JoDanni, was derived from the names of his family:  himself, Dana, and daughters, Natalie and Nicole.  He formed JoDanni's Enterprises in the early years and cooked on the side for his family and friends.  In 1985 with their encouragement, he opened a small carry-out pizza business next to the grocery on Route 4.  Six years later found him with a dining room and a catering business.

In 2009, he purchased the long closed Prairie Tug on Route 4.  Two years ago, he remodeled the building and consolidate his businesses in the one location, naming the new restaurant JoDanni's Amore'.
Celebrating communities and the role played in keeping them alive and well was emphasized on January 30 at the 16th annual awards banquet of the Coal Country Chamber of Commerce.

The banquet was held at JoDanni's Amore', centrally located among the eight communities that have come to be known as Coal Country -- Benld, Dorchester, Eagarville, East Gillespie, Gillespie, Mount Clare, Sawyerville, and Wilsonville.

Spirit Award- A new award presented on this evening was the Spirit of CCCC. Named to receive the award for his service and creative leadership was Gregory H. Craine.  Craine is with 1st BancFinancial, which is also associated with First National Bank of Staunton.  He has taken an active role in the Chamber, including spending several years on the board.

During his membership, Craine spearheaded a spring event that lasted for serveral years, organized a spring home show and pet parade in 2008, and Paws in the Park in 2009 that lasted about 5 years.  He has also been involved in helping organize or running events in conjunction with a Black Diamond Days hamburger booth, concessions at the summer concert series, and setting up booths and running the concessions at the Fall Festival.  He invented the "Big Smokie" which is served at Chamber events.

In make the presnetation, new president Brian Bequette, of Brian Bequette Cabinetry, said, "  Gregory H. Craine has been appreciated for his long time commitment of active membership and his creativity in adding features that are effective and helpful to the community events."

CCCC praises spirit of merchants in its eight communities:

Mike Mathis, a former business man, former Gillespie mayor, recently resigned after 19 years as Macoupin County Circuit Clerk, and now candidate for the 95th District seat in the Illinois House of Representatives, was the keynote speaker.  But his speech was not focused on his political campaign.  Instead he focused on life of a small town and in particular, on what it takes to be a business person in a small town.

"Our customers are our shareholdres and those are the ones we strive to make happy.  When I look around this room, I see business owners, and I think that is exactly what you do.  You should be happy with what you do.

He went on to talk about competition small businesses face, both today and years ago when he was a salesman to a wholesale company.  He asked, "How do we compete?"

Looking down the road, he said:  "I do believe the best way for us to prepare for the future of all our businesses is to continue on the path the Coal Country Chamber of Commerce has laid out for us."

He praised the chamber, saying, " And the do that in a very gracious way.  They do that by welcoming new businesses and by standing by old businesses.  They do that by shopping locally, by supporting our school programs , by committing to the whole area."

He talked about the advantages of owning a business.  " You control your own destiny.  You may not take control, bugt you make decisions for yourself and your own future. when you work in a business of your own, you work a lot more that that (40 hours) but you have the flexibility to do things.  You choose the people you want to work with."

Mathis ended on a note of praise.  " I want to recognize every business owner, every employee and their families for make the commitment to the community.  We could do it withou you.  Your staying and investing in our area is probably a risk you didn't have to take but did so willingly.  It's a risk of time and money that affects the entire area.  You do this with employment opportunities, sales tax dollars, and a votality that stretches from downtown out of town.  Thank you for that courage and commitment."

Preceding Mathis' address, Joe Tieman talked about volunteering and about the annual Tour de Coal which is a Chamber event.  He asked for help with the ride next fall.

Tieman then shifted gears into his role as superintendent of the Unit 7 school district and talked about the proposed sales tax to help school facilities in Macoupin county.

One of the benefits is that no matter where Unit 7 taxpapyers spend their money in Macoupin county, the school district will realize a percentage of what they spend on taxable goods, he explained.

The Unit 7 school district with an enrollment of approximately 1,400 students has 18 percent of all the students in the county.  The district stands to realize approximately $397,000 a year if voters agree to the tax in March.  To help make the tax less onus, the school board has pledged to use at least 20 percento of the money realized from the tax to help pay off debt the district incurred in rebuilding after mine subsidence destroyecd a new elementary school and repairing tornado damage a the high school - middle school complex.